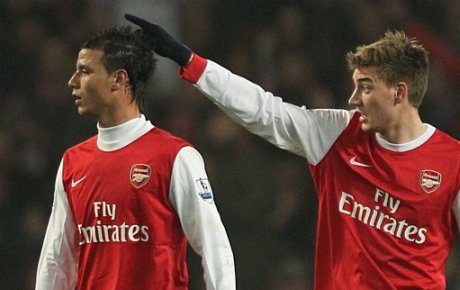 Arsenal are working on deals which will see forwards Nicklas Bendtner and Marouane Chamakh leave the club before transfer deadline day on August 31.

The news of Bendtner leaving the Gunners is nothing new. In March, he was linked to Russian side Anzhi Makhachkala and German club Hannover 96, as Sunderland reportedly were not interested in making his loan move permanent.

In August, Bendtner was said to be interesting several Bundesliga clubs, including Borussia Dortmund and Hamburg but both clubs withdrew their interest after being put off by the Dane’s high wage demands.

However, Italian giants Fiorentina are said to be ‘hopeful’ of signing the 24-year-old following ‘progressive’ discussions with Arsenal officials earlier last week.

Another forward who Arsenal hope to broker a move away from Emirates Stadium is Marouane Chamakh. According to reports in France, Spanish side Malaga are close to signing the 28-year-old Moroccan on a season-long loan.

Chamakh’s wages are expected to be heavily subsidised as part of an unofficial ‘feeder link’ agreement which was agreed when Santi Cazorla completed his £12 million switch from Andalusia to north London earlier this month.