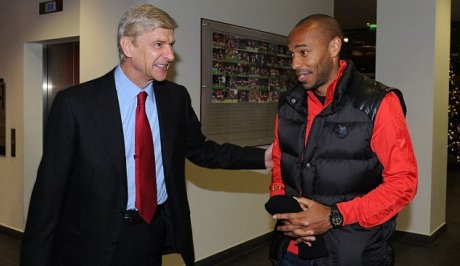 New York Red Bulls striker Thierry Henry will train with Arsenal in a bid to keep up his fitness during the MLS winter break – prompting reports that he could make another sensational return to the club in January.

The 35-year-old could be brought in as a back-up forward in January when Gervinho and Marouane Chamakh head to the Africa Cup of Nations.

During his first stint with the Gunners between 1999 and 2007, Henry became Arsenal’s leading goalscorer of all time.

It is also believed that the ex-France international could return to the north London for a third spell as a player, although any deal is dependent on New York Red Bulls’ terms and agreement.

“This year we lose Gervinho again as they are playing the Africa Cup of Nations two years in a row. So we will be confronted with a shortage – particularly if (Marouane) Chamakh should go. Then we will be short”, admitted Wenger.

Henry returned to Arsenal earlier this year for a loan two-month spell with the club, scoring two goals.

Arsenal have a tough set of fixtures in January with games against Southampton, Manchester City, Chelsea and Liverpool providing stern tests, while FA Cup clashes and a potential Capital One Cup semi-final could make the month even harder.

Do you think Gunners’ boss Arsene Wenger should bring back Thierry Henry to Arsenal in January?

Have your say by voting in the poll below and leaving your views in the comments section.