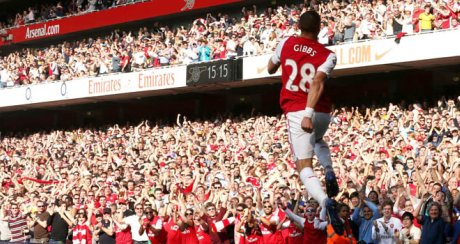 Kieran Gibbs is expected to return to the Arsenal starting line-up for Saturday evening’s Premier League clash against Aston Villa at Villa Park.

The left-back has been one of the Gunners’ most consistent performers this season and formed an excellent partnership with Lukas Podolski down Arsenal’s left hand side before suffering a troublesome thigh injury in late October.

Gibbs was on the bench for Arsenal’s previous two games against Tottenham and Montpellier, with skipper Thomas Vermaelen and Andre Santos having to fill in at left-back during his absence.

Arsenal have a lower win percentage when Gibbs hasn’t played this season, showing the importance of the 23-year-old England international to Arsene Wenger’s side.

He is also statistically ahead of Arsenal’s other left-back Andre Santos, only being beaten by a player every 99.44 minutes compared to Santos’ 28.36 minutes.

Gibbs’ increasingly impressive performances have forced Arsenal officials to assess his contract situation – which expires in the summer of 2014.

Theo Walcott, Bacary Sagna and Gibbs are all currently in discussions with the club over extending their deals at Emirates Stadium.