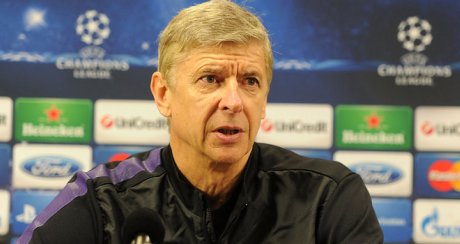 Arsene Wenger could change more than half of his team when Arsenal travel to Greece for Tuesday’s final Champions League group stage game against Olympiakos.

The Arsenal boss has been dismayed by the Gunners’ recent performances in the Premier League, with Saturday’s defeat against Swansea proving the last straw for Wenger who accused his team of ‘lacking maturity’.

Wenger also said in his post-match interview that he’s yet to find Arsenal’s ‘right attacking combination’, which means the likes of Andrey Arshavin and Marouane Chamakh could get given opportunities in attack on Tuesday.

Francis Coquelin is pencilled in to start on Tuesday, while Wenger will make a late decision on whether to play Czech midfield maestro Tomas Rosicky who has only recently returned from injury.

Arsenal have the chance to become Group B leaders if Schalke fail to win at Montpellier next week, bringing more significance to the game in Greece than previous seasons.

Meanwhile, Greek champions Olympiakos look set to have all their players available for Tuesday’s match at the Karaiskakis Stadium, although long-term absentee Avraam Papadopoulous remains out with a knee injury.

If Arsenal don’t become group leaders at least they have the chance to win some Live Casino Games at Betfair after the game. They are sure to provide similar excitement of winning the group.