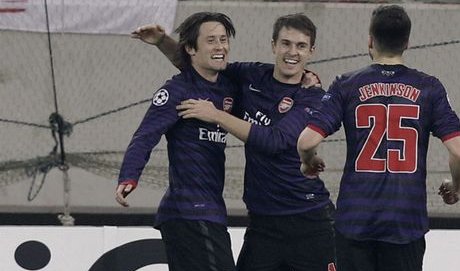 Arsenal wasted the chance to go top of their Champions League group after Greek giants Olympiakos defeated the Gunners’ in Athens.

Manager Arsene Wenger brought a weakened side to Greece knowing beforehand that qualification into the last 16 was secured following their last group game win over Montpellier.

The out-of-form north Londoners simply had to win and hope Schalke slipped up in France to ensure a more favourable draw for the last 16 but they were downed 2-1 by the Greek champions.

Tomas Rosicky gave the visitors a half-time lead but quickfire goals from Giannis Maniatis and Kostas Mitroglou won it for a resurgent Olympiakos team.