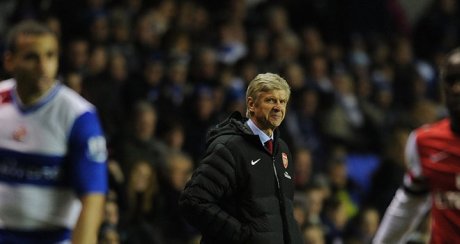 The Gunners’ goalkeeping responsibilities have been shared between Vito Mannone, Damian Martinez and Polish international Szczesny so far this season.

Wenger is understood to have concerns over the performances of all three, and is hopeful that the club can secure the signing of a proven shot stopper in January or at the end of the season.

Highly-rated Hugo Lloris and Julio Cesar were both targeted by Wenger in the summer before they were snapped up by London rivals Tottenham and QPR, while Liverpool’s Pepe Reina has been linked for several months with Wenger a long-term admirer of the Spaniard.

One rumoured target who won’t be making his way to Emirates Stadium next month is Sunderland goalkeeper Simon Mignolet.

The Belgian has made a succession of impressive performances for Martin O’Neill’s side this season, but the Black Cats manager is adamant that he won’t be leaving anytime soon.

“He’s been outstanding for us so far, so he’s definitely not someone we would want to see leave.

“I haven’t heard of that (the Arsenal link), but I’m not in any position to let our good players go in January”, said O’Neill.

22-year-old Szczesny has been involved in extra training sessions with goalkeeping coach Gerry Peyton in a bid to cut out his inconsistencies which include erratic distribution and positioning.

Gunners’ boss Wenger admitted last week that he wants to build a British core in his Arsenal squad and Birmingham’s young English ‘keeper Jack Butland is a player who has been extensively scouted by chief scout Steve Rowley this season.

Which goalkeeper, if any, would you bring to the club to keep Szczesny ‘on his toes’? Leave your view in the comments section below.