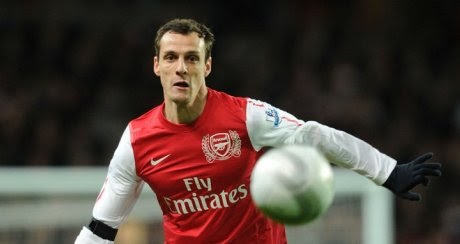 Sebastien Squillaci has priced himself out of a January move away from the club due to his ‘unrealistic’ wage demands.

The 32-year-old, whose contract expires in the summer, moved to Emirates Stadium on a three-year deal in 2010 and was deemed surplus to manager Arsene Wenger’s plans last summer but a permanent move never came to fruition despite interest from SC Bastia.

Squillaci’s lack of first-team action has seen him hold talks with a host of top flight French sides over a possible January transfer, although none of them are prepared to stump up the cash for his reported £45,000-a-week salary.

“He has to deal with many competitors and at his age really must play weekly to keep fit. It is difficult for him,” Wenger recently told Canal+.

Marseille, Nice, Monaco, Bastia, Evian, Ajaccio have all opened preliminary talks with the Frenchman’s representatives but veteran defender Squillaci has refused to budge on his excessive wage demands.

The former French international is fifth choice centre back behind Thomas Vermaelen, Per Mertesacker, Laurent Koscielny and youngster Ignasi Miquel.

He’s now expected to stay at the club until his contract expires in six months time.