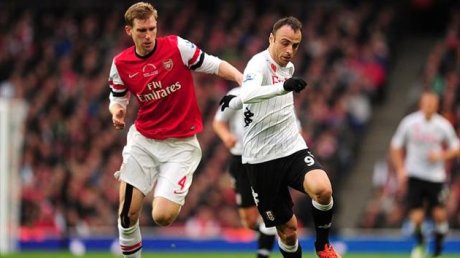 Arsenal’s terrific run of form was halted slightly after Tuesday’s 0-0 draw with Everton, but they are still a side full of confidence.

Fulham, meanwhile, were on the wrong end of 3-0 scoreline in the West London derby against Chelsea on Wednesday night. Their season is in danger of petering out.

Fulham sit in mid-table after an impressive campaign, but they haven’t won in three games and won’t want to finish the season on a low note.

They still look too reliant on Dimitar Berbatov for inspiration, and the 31-year-old Bulgarian has scored 13 goals in 25 games in the Premier League this season. Some thought his best days were behind him after a disappointing time at Manchester United, but he has proved his doubters wrong.

Fulham have lost six of their 17 home games this season, winning seven and drawing the other three.

Steve Sidwell looks set to return to the starting lineup after serving his
three-match suspension, while Damien Duff will miss the game because of an abductor strain.

Just one defeat in nine games represents an excellent run of form from Arsene Wenger’s side, with seven of those games resulting in victories. Chelsea’s win at Craven Cottage on Wednesday, coupled with their draw with Everton, has put the pressure back on Arsenal, who are also neck and neck with Tottenham in the battle for top four.

Victory for the visitors would be a huge three points, cranking up the pressure on Tottenham and Chelsea, who play on Sunday. Arsenal have lost just four away games in the league this season, with the last defeat on their travels the North London derby loss to Tottenham. They have won three of their last four away games.

Barring Lukasz Fabianksi, who has a cracked rib, Wenger has virtually a fully fit squad to choose from.

Jack Wilshere has struggled since coming back from injury, but looks set to start the game. Meanwhile, Kieran Gibbs and Nacho Monreal will battle for a starting berth at left-back.

Out of 47 meetings between the two clubs, Arsenal have won 30 and Fulham just 7.

Arsenal have, however, won just one of the last five Premier League meetings between the two sides, back in December 2010. The reverse fixture at the Emirates earlier in the season resulted in a thrilling 3-3 draw.

There is no doubt that this is a more important game for Arsenal, who know that more dropped points could be fatal in their quest for Champions League football next season.

Fulham will want to finish in the top half of the table, and can play with a certain amount of freedom. They will, however, be under pressure to perform after Wednesday’s disappointing defeat to Chelsea. For the betting people, Arsenal are tipped favourites to win the game fair and square. You can lay an Arsenal win at 1.78 – head over to http://betting.betfair.com/football/ to put a bet on it.

However, It will be a close affair but Arsenal will just have the edge over MartinJol’s side.