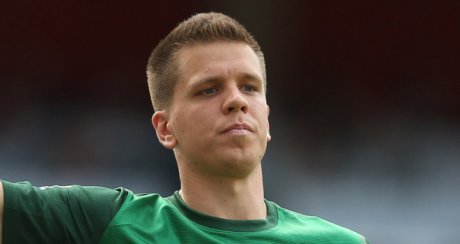 Wojciech Szczesny has retained his spot in goal as Arsenal’s no.1 ‘keeper and will start every game until the end of the season, injury permitting.

The Polish shot stopper had been dropped to the bench after an erratic run of form with Gunners boss Arsene Wenger preferring his countryman Lukasz Fabianski for Bayern Munich, West Brom and Norwich.

However, in an unfortunate turn of events for Fabianski, the 28-year-old suffered a rib injury in the 3-1 over Norwich City last weekend and isn’t expected to return for at least another fortnight.

Speaking after the 0-0 draw with Everton on Wednesday night, Wenger expressed his delight at Szczesny’s return to form.

“I was pleased with his focus, with his sharpness. He dealt well with the situation that he faced. In our job, there is only one way to respond, which is to practise harder and stronger and show that you are ready for a fight. That is what he did.”

Fabianski’s contract expires next summer and his constant injury problems mean Arsenal officials are reluctant to offer him an extension.

Signed from Legia Warsaw for £2.1million in 2007, Fabianski has made 31 appearances and kept 10 clean sheets.

Leave your thoughts on Arsenal’s goalkeeping situation in the comments section below.