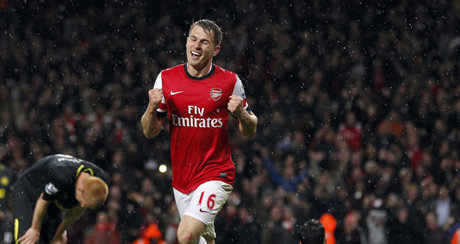 The triangles, flicks and six-yard passing look faster and more fluent at Arsenal. Aaron Ramsey is forcing his way into the team because, despite the fact he may infuriate occasionally, the Gunners play better when he is in the team. Alongside the usually nerveless Wilshere and Gibbs, the team looks robust and unintimidated. Ramsey has learned to play at a higher tempo, rushing and smothering in the style of Pedro – maybe the best at pressing in the world – who does it so well at Barcelona.

Mikel Arteta generally takes the deeper role, where Wenger likes him to receive the ball and dictate the tempo. Room will be found for Wilshere next season, but Coquelin will go. Frimpong appears not to have a future – lacking technically, a less capable version of Wanyama. Diaby has a contract until June 2014 and unless there is a sea-change in his fortunes, Wenger will release him at the end of it. The smart money is on a bid for Lyon’s Maxime Gonalons. He is a tall, dynamic defensive midfielder with a superb passing range.

I am a Podolski fan and a Giroud sceptic – something tells me the German won’t be around long. The vain Frenchman has touch, strength, knows the role of a target man, and has a decent left foot. I accept those qualities but see weaknesses that time won’t change.

The exciting story doing the rounds in Spain is that Arsenal have a ‘preliminary agreement’ in place for the under-appreciated Gonzalo Higuaín. Higuaín is leaving Real Madrid this summer and escaping the goldfish bowl of playing for the most glamorous club in the world. In his words: “every little thing you do gets analysed; everything has twice the impact it would somewhere else.” Could Wenger sign the star striker and in doing thus instantly give the team the sharpest of sharp edges? You can’t mention his name in Madrid without hearing Benzema being compared, so perhaps he’ll thrive as the main forward at another big club.

Benzema is a technical forward who lights up quick combinations, whilst Higuaín is the poacher, the more athletic, counter attacker. Mourinho tried to distance himself from the debate – he just wants to win, but others consider Benzema the more artistic, romantic player.

We hear Higuaín could be sold for £22m, Arsenal want him for £18m. If Wenger sanctions the signing of an established world class forward of Higuaín’s finishing calibre, I predict the combination of Arsenal’s slick build-ups and rapid counter-attacks – combined with his fast game – will mean he would become an unprecedented success.