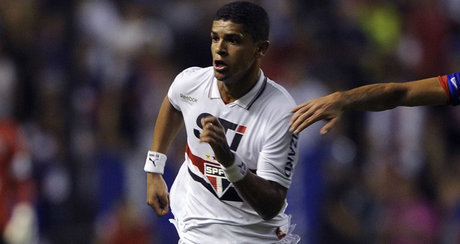 Denilson will leave Arsenal at the end of the month after mutually agreeing to terminate his contract.

The 25-year-old has been in Brazil since 2011 on an initial season-long loan with Sao Paulo, which was later extended.

And now it has been confirmed by the players agent that Arsenal boss Arsene Wenger has agreed to cancel the midfielder’s contract when it expires in a few weeks time.

“I can confirm Denilson and Arsenal have agreed to terminate his contract at the end of this month,” said Tom Soares.

“Denilson is free to move to another club and a number of clubs are interested in him.”

Brazilian midfielder Denilson was tipped for big things when he joined the Gunners from Sao Paulo in a £3.4million deal in August 2006.

However, after making making over 150 appearances for the club his erratic form saw him lose his place before being shipped back to Brazil.

Denilson is among a host of fringe and unwanted Arsenal players who have seen their contracts run down this summer.

Marouane Chamakh and Park Chu-Young are also included in the Arsenal betting odds and are expected to be part of the clear-out.