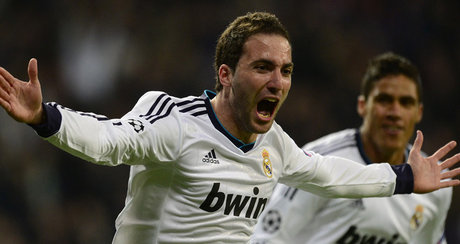 Arsenal are prepared to offer ‘as much as £25 million’ to sign Real Madrid striker Gonzalo Higuain.

Reports emanating from Spain claim that the Gunners have leapfrogged Italian giants Juventus in the race to sign the wantaway Argentine international.

The 25-year-old told Real officials after the club’s last game of the season that he was looking to leave, six seasons after joining from River Plate.

Gunners boss Wenger is desperate to sign an established striker this summer and believes that Higuain has ‘all the qualities’ to lead the line for the club next season.

Meanwhile, Wenger is said to be reluctant to offer Everton midfielder Marouane Fellaini more than £70,000-a-week after recent reports linked the Belgian with a move to Emirates Stadium.

Highly-rated Fellaini is among ‘three to four’ big name players who are being looked at by Arsenal, with Wenger expected to spend most of the rumoured £80m transfer war chest available to him this summer.