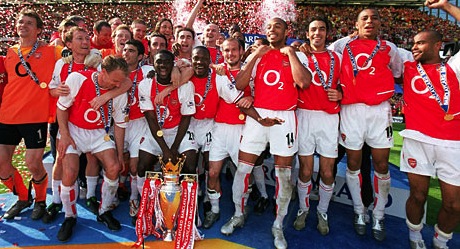 Arsenal’s away kit for next season is expected to be a tribute to the kit worn by the Gunners’ legendary Invincibles squad.

The kit, which has been pencilled in for release on July 31st, is likely to be one of the last shirt’s manufactured by kit sponsor Nike after Arsenal signed a pre-agreement with Puma for the 2014/15 season.

In terms of design, the shirt has a blue crossover V-neck collar with yellow trim, and blue sleeves with a yellow band near the cuff. The home shirt will remain the same.

Puma’s upcoming deal with Arsenal could fetch the club up to £30million a year, giving Arsene Wenger’s side added financial muscle in a competitive transfer market.

Various reports claim Gonzalo Higuain is edging ever closer to joining Arsenal on a long-term deal.

The 25-year-old Argentine international has agreed a four year contract worth £115,000 a week, according to The Times.