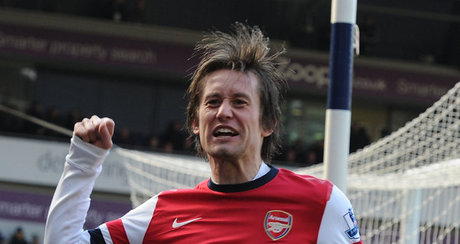 Tomas Rosicky will not be leaving Arsenal this summer despite tentative interest from Greek champions Olympiakos.

The Czech midfielder confirmed via his official Facebook page that reports linking him with a move away from North London were ‘rubbish’.

Rosicky, whose contract expires at the end of next season, is settled in London where his wife is reportedly ‘weeks away’ from giving birth.

Greek giants Olympiakos, bankrolled by shipping magnate Vangelis Marinakis, have made tentative enquiries for Rosicky but were recently told by Arsenal officials that the 32-year-old won’t be let go until his contract expires.

Everton were the last club to make an approach for Rosicky in January, as Gooner Talk exclusively revealed.

Meanwhile, French daily L’Equipe are reporting that Saint-Étienne youngster Josuha Guilavogui is being tracked by the Gunners.

Guilavogui, 22, is a tough tackling, defensive midfielder who has been capped at senior level by France.