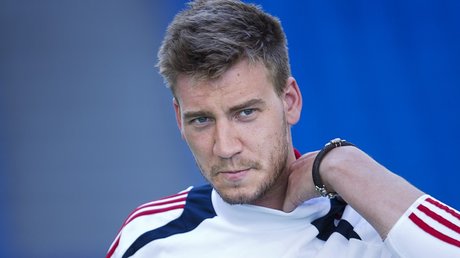 Nicklas Bendtner’s protracted exit from Arsenal looks likely to finally be completed this week when he joins German side Eintracht Frankfurt.

The Danish international has been desperate to leave the Gunners for two seasons following unsuccessful loan spells with Sunderland and Juventus.

Bendtner, 25, joined Arsenal in 2005 but has never managed to hold down a regular place in Arsene Wenger’s side due to inconsistent performances and off-the-field issues.

The former FC Copenhagen striker hasn’t played for Arsenal since August 2011, having scored 43 goals in 157 appearances since joining the club as a youth-team player.

A fee in the region of €3m (£2.3m) has been touted for Bendtner, though additional fees and clauses are likely to be included within the final deal.

Bundesliga up-and-comers Frankfurt still need to persuade the outspoken Dane to take a hit on his reported £52,000-per-week salary, but further details surrounding the contract offered to him are currently unknown.