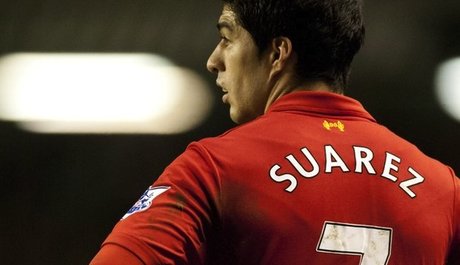 Liverpool striker Luis Suarez has spoken about the reported interest from Arsenal and admits that ‘it’s good to know’ he is still ‘valued’ by teams like Arsene Wenger’s side.

Suarez, who bagged 23 Premier League goals for the Reds last season, has been linked with various clubs since May after saying that it would be a “good moment for change”.

And according to the BBC, Arsenal have already tabled a surprise £30million bid for the 26-year-old Uruguayan international – although Suarez denies that he’s received any offers.

“There have been no offers yet, but Liverpool know exactly what is going on and what I want.”

“My agent is in charge, he knows what I want, I am resting and relaxed. I am due back in about ten days, on the 21st of July (for the friendly with Melbourne Victory)… a phone call could change everything.”

“Is good to know that I am still valued by teams like Arsenal. Friends call me up to ask if I am moving to Chelsea, to which I laugh.”

However, it’s not expected that Suarez will force through a move and he is expected to return to Melwood for pre-season training in less than a fortnight.

Bookmakers have seen a significant amount of customers backing the controversial frontman to make a shock move to north London this summer and have cut the transfer to 2/1.