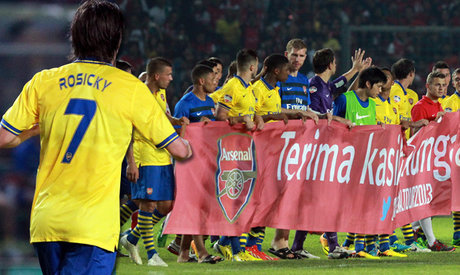 Arsenal midfielder Tomas Rosicky has reiterated his commitment to the club and admits he is keen on ending his career at Emirates Stadium.

The 32-year-old is one of the club’s current longest serving players but has endured several injury ravaged seasons since arriving from Borussia Dortmund in 2006.

“Prague will always be my home, so when the end here comes we will move back to Prague”, Rosicky told Arsenal Sweden.

“I live where the football takes me.

“But everything’s good here [in London]. I don’t care so much about the city I live in, because it’s all about football for me. But of course London is a big and beautiful city.

“In a perfect world I will end my career here [at Arsenal]”.

Sparta Prague, where Rosicky started his career, have shown interest in Rosicky but the Czech has previously said Arsenal manager Arsene Wenger has told him he remains in his plans for the new campaign and will not be sold.

Rosicky’s experience will be vital for Arsenal in both European and domestic matches next season where a bet on football at William Hill could see Gooners winning large amounts.

The attacking midfielder has made over 125 appearances, scoring 15 goals in just over seven years. His contract expires next summer.