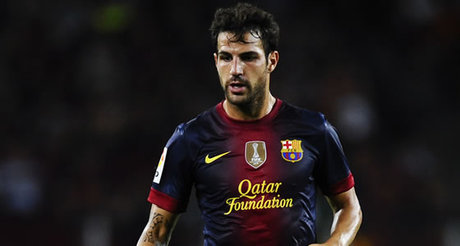 Manchester United have not given up on their chase to sign former Arsenal skipper Cesc Fabregas, and Gunners boss Arsene Wenger continues to monitor the ongoing situation ‘with interest’.

United chief Moyes confirmed this week that the Red Devils had made a second bid for the 26-year-old, although Fabregas’ Barca teammates Gerard Pique and Alex Song have both said that he won’t be leaving the Nou Camp anytime soon.

Despite not being in the market for Fabregas this summer, Arsenal remain on ‘alert’ because of a buy-back clause inserted when the player left for the Catalonia club two years ago.

“At the moment, Fabregas has decided to stay one more year at Barcelona”, revealed Wenger last week.

“We have the clause in the contract so we would be on alert but at the moment that`s not something we`re after.”

Wenger has turned his attention to the Uruguay international after being ‘priced out’ of a move for Gonzalo Higuain who joined Napoli yesterday.