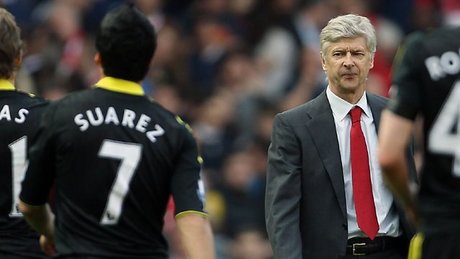 The reasons for this summers lack of movement so far in the transfer market could be down to any, or a combination of, several factors. Which you choose to believe or discount may well reflect your own ideology, or your partiality to rhetoric of our Mr Wenger. Could it Dick Law’s lack of talent at the negotiating table, the fact that Arsenal are no longer a big draw, or Wenger’s sheer intransigence to spend?

For my own part, I find the idea simply irresistible that Wenger (despite Gazidis’ denials) retains a nagging attachment to a utopia where he achieves something incredible – whilst spending so much less than his competitors. He is patient (well, you can afford to be on a £7m a year salary), and my view is the ultimate end-goal of success will be his to savour and so much more beautifully pure when it happens.

How does this translate with a summer of several big transfer offers? I feel there was a moment to close the Higuaín transfer – albeit at a higher price (which he was worth by current market standards anyway); the chance to get Bayer Leverkusen to sell Lars Bender was greater before they sold André Schürrle and Daniel Carvajal; Luiz Gustavo has only ever appeared to be interest and now appears highly unlikely; whilst Suárez and Rooney are both flawed characters, destined to be difficult and confrontational transfers. Several of these deals could arguably have been sealed with the necessary commitment to doing so.

Last year Giroud and Podolski were earmarked as key transfer targets at very early stages. This summer it feels as though Arsenal are loosely working within the confines of a slack, general idea of what they would like. Could the club answer who was their first choice striker transfer at the start of the summer? Possibly not.

I do believe that a bid was submitted for Stephan El Shaarawy (rejected when the player wanted to stay in Milan.) Higuaín and Suárez are different players but would both have electrified the front line, given it the ‘teeth’ to close games, and dragged defences to make space for our creative midfielders. Suárez is the better forward (in my view) with his spinning runs wide onto the weaker fullback, his great close control, sturdy body strength and frenzied desire to win. That desire has sometimes manifested itself in the ugly elements of the game, as have been widely reported.

Where Arsenal go from here before the end of the window cannot be predicted, but there are still options available. Swansea’s long-legged forward Michu can drop deep and win a game with his first chance. Edin Džeko, a strong target man with a silky touch like Berbatov, might be considered too similar to Giroud and too lacking in speed. The Džeko options falls down more when you add that Sanogo occupies the same positions he does, as well as Giroud. Looking abroad, Jackson Martinez is a goal-facing finisher built like a wide receiver. He scored 29 in 38 last season for Porto. Porto, regrettably in this case, are notoriously difficult to negotiate with and have no wish to sell at a sensible price – but he does have a £35m release clause. Luis Muriel, a young Rooney-shaped Colombian striker at Udinese, will be a house-hold name within 5 years.

I hope there is a plan. I hope Arsenal somehow manage to secure a Suárez, a Chicharito, or an Alexis Sánchez-type that can spin wide fast into space and sell shirts. I think they also need the versatility of a clever forward that drops into space to suck in defenders and outnumber stubborn opposition midfielders. If Arsenal can shake off their ideological restraints and other factors hindering the closing of key deals, the basis for a strong season is already in place.