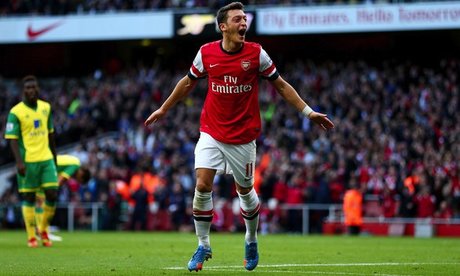 A wonderful second-half surge from Arsenal saw the Gunners claim all three points against Norwich at Emirates Stadium.

Goals from Jack Wilshere and Aaron Ramsey made sure of victory while summer signing Mesut Özil scored an excellent brace in what was an excellent team performance by Arsene Wenger’s side.

Despite a jaded start from the Gunners, Wilshere scored his first Premier League goal at Emirates Stadium on 18 minutes after finishing off a ‘tika-taka’ style move.

Özil’s header looked as if it secured Arsenal all three points, but Norwich midfielder Jonny Howson struck an excellent effort past Szczesny to set-up a nervy final 20 minutes in north London.

However, Aaron Ramsey’s superb solo strike and Ozil’s clipped finish at the near post from the Welshman’s cross made sure of Arsenal’s lead at the summit of the Premier League.