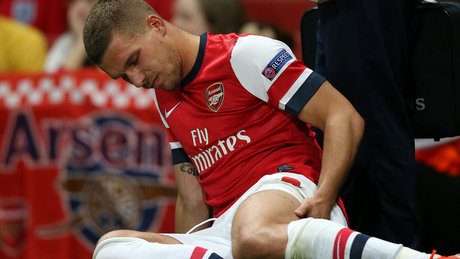 Arsenal striker Lukas Podolski has revealed that he expects to return to fitness for the Gunners within 4 to 6 weeks.

The Germany international suffered a torn hamstring in September’s Champions League qualifier against Fenerbahce and has been forced to spend much of his rehabilitation in the gym.

However, Podolski confirmed in an interview with German broadcaster ZDF that he expects to return to the fray by early December.

It was initially thought Podolski would be out for up to 10 weeks until German national team doctor Hans-Wilhem Mueller-Wohlfahrt examined the 28-year-old in Munich and found that he had a hamstring tear in his left leg.

Podolski is among several other long-term Arsenal absentees which include Alex Oxlade-Chamberlain, Theo Walcott and injury prone midfielder Abou Diaby.