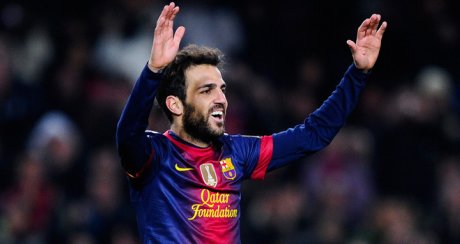 The 26-year-old, who spent eight years in north London, returned to his boyhood club Barcelona two years ago and now plays alongside some of the biggest talents in world football including Lionel Messi.

Fabregas has heaped praise on his former manager Arsene Wenger for the shrewd additions he made this summer, bringing in £42.5million man Mesut Ozil and another ex-Gunner in Mathieu Flamini.

“If you saw Flamini play at Milan he is not the same player and yet he was doing the same thing but it was not valued the same way”, Fabregas told the Guardian.

“Arsenal have players who have great movement and Mathieu interprets that very well. And he runs something like 13km every match, something incredible. I am happy he is back.

“They can both go as far as they want to They have quality on the ball and they have the physical attributes.

“Ramsey’s stamina is spectacular. He and Flamini are the best I’ve ever seen in terms of covering the ground and being physically strong.”