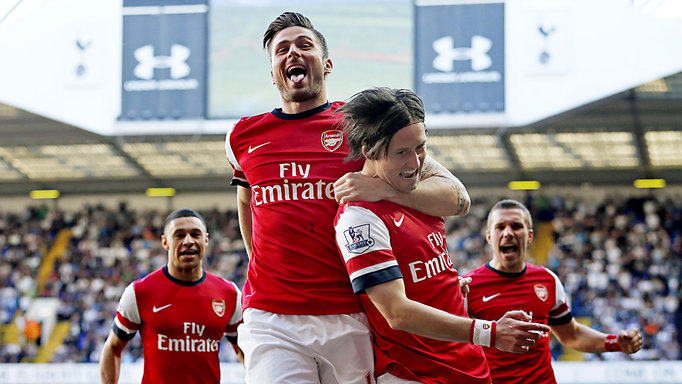 The Gunners face the holders in north London tomorrow, with almost 50,000 Arsenal supporters expected to attend the game.

It is arguably the club’s biggest match of the season with Arsene Wenger’s side desperate to end their eight year trophy drought.

Here’s what the players think:

Oxlade-Chamberlain on the big game..

“Once you do get that experience of winning the first one, you automatically build confidence you can go and do it again. That experience is vital.”

“The squad needs that 100 per cent. I always hear commentators talking about squads that have been around and won things.

“They always mention the experience of winning, knowing what it takes. And they’ve only got that through winning trophies.

“That is definitely ­something that will help this team to go on and push forward and be successful.”

“It is a lot easier said than done, but we are in a ­position where we can make that happen, in a position where it is our responsibility to take that opportunity.”

“It would be a big lift for everyone because you still have a lot of players here who don’t know how it feels to win a trophy.

“Mainly the guys who are coming through like Jack (Wilshere), Aaron (Ramsey) and all these boys. They don’t know how success tastes, so it is a massive chance for us to win a trophy this year.

“It would be a building block for these guys.”

“It is always like this in football – when you win something, you are the best, you are the hero. When you win nothing or you lose a couple of matches, you are like nothing for the people and for the newspapers, the TV and the for the fans.

“But I think this is a part of sport – you win together and you lose together but in the end you must concentrate on your job and forget all the other things that have happened.

“We have the chance now for the FA Cup and we will see what we can do on Saturday – and I can promise we will give all of what we have to go through to the final.”

“When you play for Arsenal, every year you fight for the title and this year we were close to winning the league. Nearly the whole season, we were top of the League and now the last matches were not so good.

“We have a big chance for the FA Cup and we must keep that chance.

“It is the biggest cup in the world and a big tradition.”