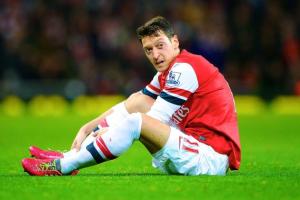 Former Germany captain Michael Ballack does not know what has happened to Mesut Ozil but is confident Arsene Wenger will help him rediscover his best form.

Ozil has come in for mass criticism from fans and media alike since the start of the season for his lacklustre performances, the latest coming in the 2-0 defeat at Borussia Dortmund.

After returning from Brazil as a World Cup winner, Ozil was expected to lead Arsenal’s charge for the Premier League title but he has struggled playing on the left of midfield in Wenger’s 4-1-4-1 formation.

However, Ballack – who won 98 caps for Germany – is confident Ozil will rediscover his form and says Arsenal fans should trust Wenger.

“When you a buy a player like Ozil you know his strengths and Wenger knows, I think, where he is at his best,” Ballack told Sky Sports.

“In his younger ages when he grew up from Schalke and Werder Bremen he was mostly in the [centre of] midfield so he felt very comfortable there but in terms of pace he’s good on the side as well.”

“But, he needs to learn how to defend as well because on these winger positions you need to defend. At this level, if one player’s out you have no chance.”

The £42m man has yet to register a goal or assist this season and many fans are clamouring for Wenger to get him back into the centre of midfield where he is at his most deadly.
This would mean dropping one of Aaron Ramsey or Jack Wilshere to accommodate Ozil or reverting back to last season’s 4-2-3-1 formation which seems to be the preference among supporters as it would also shore up the team defensively.