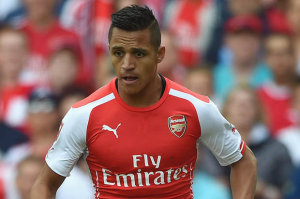 Alexis Sanchez scored a stunning free kick during the 2-1 defeat at home to Southampton in the Capital One Cup and continued his great goalscoring form.

The Chilean belted the ball into the top corner with power and dip from all of 25 yards and left visiting goalkeeper Frazier Forster watching on in admiration.

It’s a goal that had Arsenal fans purring as goals from free-kicks have been a rarity in recent years.

The likes of Thierry Henry, Cesc Fabregas and Robin van Persie were experts from dead-ball situations and scored their fair share of thunderbolts.

Where you do think Sanchez’s free-kick ranks against these strikes from recent memory?

With the game level at 0-0 after an hour, Arsenal Wenger summoned his captain from the bench in search of finding a breakthrough and boy did Cesc deliver.

Minutes after coming on, he curled a delicious free-kick into the corner of Brad Friedel’s goal from 25 yards and added another soon after before having to leave the field with an injury after 20 minutes.

Le Magnifique! This was vintage Henry.

Trailing 1-0 to a dogged Charlton side at the Valley, Henry rescued a point and maintained Arsenal’s unbeaten run in 2004 with a peach of a free-kick.

Standing hands on hips just outside the box, Henry was faced with a crammed penalty box and players on the goal line either side of Dean Kiely.

The only place he could score was to the goalkeeper’s side in the top corner and he did exactly that.

A crashing free-kick from the Dutchman gave Arsenal an aggregate lead over Wigan in the Carling Cup semi-final at Highbury.

This goal brings back memories for me as I was sat directly behind the goal and witnessed first-hand the power and dip on the ball.

Van Persie has a sledgehammer of a left foot and it was evident here as he slammed the ball into the top corner from 25 yards.

This free-kick was more memorable for the Frenchman’s mocking of the referee after the goal than the actual strike itself.

Henry was ordered to re-take the free-kick by the official which did not go down well and Wigan felt the full force of his anger.

All of 25 yards out, Henry stroked the ball over the wall and into the net via the post before sarcastically asking the official “is that enough?”