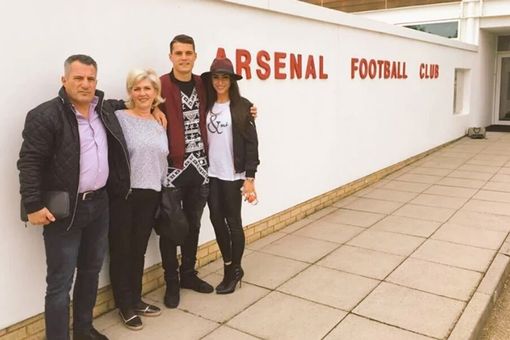 Arsenal are set to complete the signing of Borussia Monchengladbach midfielder Granit Xhaka in the coming days, after images of the 23-year-old emerged online earlier on Saturday afternoon.

Xhaka flew to England from Germany on Friday afternoon for his medical at London Colney, with the clubs believed to have agreed a deal in the region of £34m, making the Swiss international the Gunners’ second most expensive signing of all time.

The midfielder will be expected to line up alongside Santi Cazorla in the first-team next season, fighting for a place in the side against the likes of Jack Wilshere, Mohamed Elneny, Francis Coquelin and Aaron Ramsey – although the Welshman could be pushed back out onto the wide right, with Alex Iwobi potentially benched.

Great work from Arsenal bringing in Granit Xhaka before the Euros. He’ll add some much-needed steel to the midfield. pic.twitter.com/WfCqOiAbmt

Although no confirmation has been made by the either side yet, images of Xhaka wearing the club’s new home kit emerged online, with the player seemingly going through his mandatory photoshoot, with the announcement widely expected by Monday evening.