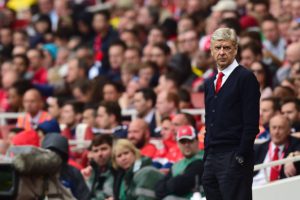 Arsène Wenger would ‘fit the criteria perfectly’ to succeed as the next England boss, according to Football Association chief executive Martin Glenn, per BBC Sport.

Wenger, who celebrates 20 years as manager at Arsenal on Saturday, is due to finish out his contract at the end of the season.

The Frenchman told the media yesterday during his pre-match press conference ahead of Sunday’s game against Burnley that he will assess his future at the end of the season.

England are on the look out for a new manager after Sam Allardyce stepped down following an investigation led by The Telegraph, in which the former Sunderland manager disclosed to undercover reporters how to get around player ownership rules.

In the meantime, England Under-21s coach Gareth Southgate will manage the Three Lions on an interim basis.

Glenn was quoted saying, ‘We are not looking for a saint, we are looking for someone who is great at winning matches, can motivate a team, can make us a far better competitor.’