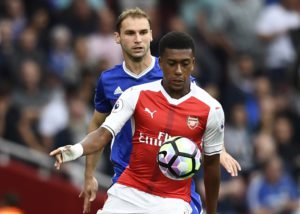 Due to his outstanding form so far this season, Arsenal are set to offer Alex Iwobi a new contract extension, as reported by the Mirror.

The Nigerian international has impressed Arsene Wenger with his progress so far, which has led the club to offer him a contract extension, six months after he signed his contract in April. The 20-year-old is the latest academy product to break into the first-team following on from the likes of Hector Bellerin – who is also set for a new deal – , Francis Coquelin and Jack Wilshere.

Although Iwobi has only been with the first-team for a relatively short time, he has already become an essential player for the squad and is now arguably the starting left-winger. With the influx of money coming from the new TV deal, Arsenal are looking to sign multiple players down to long-term deals. As mentioned, Iwobi and Bellerin will be offered new deals, while Mesut Ozil and ALexis Sanchez are yet to confirm their new contracts.