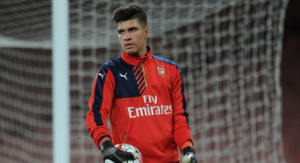 Arsenal under-18 ‘keeper, Joao Virginia has signed his first professional contract with Arsenal today, as reported by Arsenal.com.

The 17-year-old has been very impressive since his move from Benfica in 2015. Virginia was part of the Arsenal under-17 team which won the ABN AMRO Future Cup last season. He made three crucial penalty saves in the final and was arguably one of Arsenal’s best players.

At international level, he has represented the under-17 team and was included in the Portuguese Olympic squad in the summer. At club level, he has been promoted to the under-18s this season and has also been a part of Arsenal’s under-19 ‘UEFA Youth League’ team. Hopefully his first pro-deal is just the start of a bright career with the club.