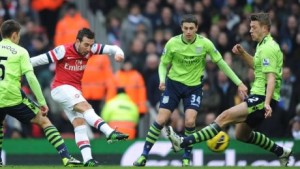 With his contract due to expire next summer, Arsenal star Santi Cazorla has attracted interest from a host of clubs. Juventus were the latest to be linked with the Spanish star but now according to Spanish website Fichajes, La Liga clubs, Atletico Madrid, Valencia and Sevilla are lining up to sign Cazorla.

It is unclear whether the La Liga clubs will make a move for the Spaniard in January or whether they’ll wait for him to become a free agent in the summer. Arsenal are in a precarious position, although the Spaniard is now 31, he is still a vital member of Wenger’s first-team, having features nine times for Arsenal so far this season. If Arsenal do not sign Cazorla to a new deal they could risk losing him in January for a relatively low fee or he could leave for free in the summer.

It would be a surprise if Cazorla doesn’t sign Cazorla a new deal, as he recently spoke of happiness to stay at the club.