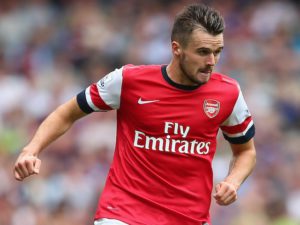 Having faced nine months out due to a serious knee injury, Carl Jenkinson made his return for the under-23 side against Southampton on Friday night, as reported by the Mirror.

Jenkinson spent two seasons on loan at West Ham; the first he was very impressive and in the second, he picked up a knee injury which ruled him out for the rest of the season and was sent back to Arsenal.  The fullback had stepped up his recovery in the last few weeks and returned to full training. Due to his return to fitness, Jenkinson was given the starting role for the under-23s tonight.

Jenkinson played over an hour before being taken off for Chiori Johnson in the nil-nil draw. Indeed Wenger spoke of his mental strength earlier this week.

‘It has been very tough for him because he had the knee and after, the shoulders. You think it’s endless at that age, you need to be patient. He has been patient, resilient and he has a fantastic mentality – he has worked very hard to come back. He had the support of everybody here at the club and I think he has done extremely well.’