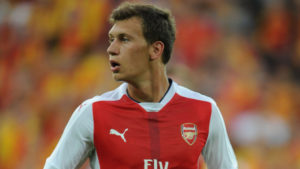 Arsene Wenger has confirmed that Arsenal will intend to loan under-23 star, Krystian Bielik in January, as reported by Squawka. Signed in January 2015, Bielik has since cemented his place with the under-21 and now under-23 team. The 18-year-old, who has been converted from a defensive midfielder to centre-back, has made two senior appearances for the first-team and was included in Arsenal’s pre-season tour this past summer.

Bielik made his debut against Sheffield Wednesday in the League Cup last season, while also coming on as a second-half substitute against Nottingham Forest last month. There is stiff competition in both midfield and defence at the moment, thus Wenger has decided that a loan move away to gain first-team experience would be best for the young Pole. 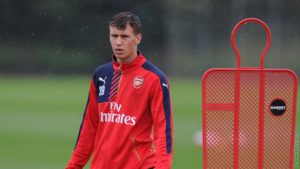 ‘The plan with him is to continue his development. He works with us a lot, with the first team. He has developed very well and for me he has all the attributes to be a great player.

‘Now, he is not ready experience-wise to play in our team, so hopefully I will consider the situation at the end of December to see if he can go out somewhere or whether we’ll keep him here until the end of the season.’

Bielik is well regarded in the Arsenal academy and has been earmarked to play in the first-team in the future.