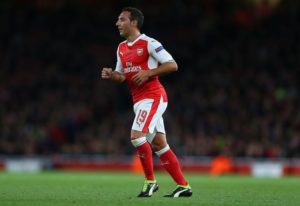 In his press conference today, Arsene Wenger confirmed that Santi Cazorla could miss this weekend’s game against Middlesbrough. The Spaniard came off in the second-half of Arsenal’s game versus Ludogorets with an apparent foot injury and is Arsenal’s only major injury according to Wenger, as reported by the Express.

‘From Wednesday night it looks like we have no big problems, the only uncertainty I have is Santi Cazorla who got a kick. We’ll see how he is today and nobody coming back. Of course we lose Xhaka because he’s suspended. Everybody else should be available.’

Granit Xhaka picked up a red card in last weekend’s game against Swansea, thus Elneny will more than likely come in to replace Cazorla. The little Spaniard has been an ever-present, only missing one game, while scoring two goals to go along with three assists in 11 appearances. Arsenal sit joint top with Manchester City and will be looking to continue their 11-match unbeaten run.