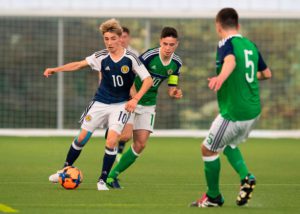 Arsenal have joined Manchester City, Chelsea and Manchester United in the race for promising Scottish star, Billy Gilmour, according to the Mirror.

The 15-year-old caught the attention of many scouts at this year’s Victory Shield tournament which is currently being held in Edinburgh. The youngster is considered one of the best talents in Scotland and Rangers are desperate to keep him at the club. Although he is young, Gilmour is reported to be commanding a fee of £3 million, due to the interest of England’s top clubs.

Rangers boss, Mark Warburton is already a big admirer of the Scotland under-16 international.

‘Billy Gilmour is a product of the academy, and the academy work so, so hard. I was at the Hall of Fame dinner and I heard Hugh McIlvanney speak about the need to produce two, three or four outstanding young talents. I think Billy Gilmour could well be one of those such talents’