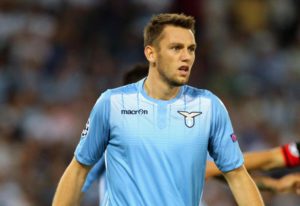 According to talkSPORT, Arsenal are tracking Lazio defender, Stefan de Vrij amid contract talks with the Italian club.

The north London club are apparently after the Dutch international as he is yet to sign a new contract with Lazio – his current deal with the club runs out in 2018. Lazio are hoping to tie him down to new terms, which would also include a release clause, in order to stave off interest from Arsenal and Chelsea.

The Holland international arrived in Serie A in 2014 following a move from Feyenoord. Chelsea had tabled an offer for the defender in the summer but it was declined as Lazio are confident they can keep the defender.

Arsenal had signed Shkodran Mustafi and Rob Holding in the summer, but de Vrij could still add valuable depth to a defensive group that could lose Mertesacker in the summer, while Gabriel has not improved since his arrival from Villareal.