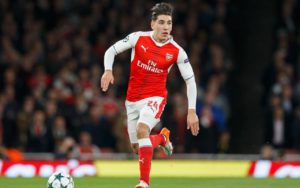 As all Arsenal fans will know, November is far from the best month of the year, with Arsène Wenger’s Gunners averaging 1,59 points per game in the Premier League mainly due to injuries. This year already looks like it’s not going to be an exception, as Eduardo Fernandez-Abascal – the same journalist that reported the length of Lucas Perez’s injury – is now reporting that Hector Bellerin has an ankle ligament injury that will keep him out of the side for three to four weeks.

Understand Hector Bellerin will be out until December with ankle ligament injury #Arsenal #afc
https://t.co/9zAZKZtMJa

The Spanish right-back, who is said to have extended his contract until 2022, will be sorely missed, as the gunners are already facing the possible absence of Alexis Sanchez for the next few games, including the trip to Old Trafford and the decisive reception of PSG in the Champions League. In his absence, Carl Jenkinson looks set to replace him, even after his abysmal performance in Sofia.

November is well and truly there, let’s hope the guys can keep their unbeaten run going, and we wish a speedy recovery to all our injured players.