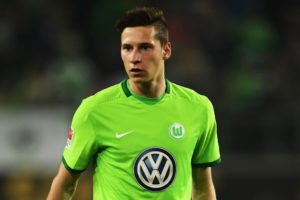 Long-term Arsenal target, Julian Draxler has once again been linked with the Gunners after Wolfsburg’s sporting director, Klaus Allofs, has indicated that Wolfsburg could indeed sell Draxler in the near future he told German Sports channel Sport1 (h/t Goal.com).

Arsenal had been linked with Draxler back when he played for Schalke 04 although the large transfer never materialised. Instead of moving abroad, Draxler instead moved to Wolfsburg where last season where he seemed to rediscover the form that attracted many clubs to him when he was younger.

Following an impressive Euro campaign with Germany over the summer, Draxler was once again linked with Arsenal and also PSG but Wolfsburg managed to keep the 23-year-old. Draxler was reportedly unhappy that the club blocked his transfer and that seems to have translated into his form this season, thus changing Allofs’ stance on the matter.

‘We’ll evaluate the situation differently, and we may do things differently next time, does this mean letting him [Draxler] leave? Potentially. He wants to get back to his level, he wants to help.’