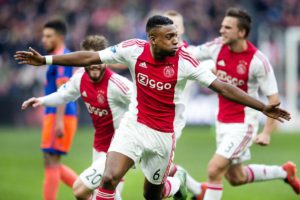 Dubbed the ‘new Vieira’, Riechedly Bazoer has been hailed as the next Dutch talent to come out of Ajax. The young midfielder had taken the Eredivisie by storm in his first two seasons playing first-team football but has seen his role somewhat diminish under new manager Peter Bosz. Due to his reduced playing title, there are multiple reports that Ajax will allow the youngster to leave the club.

Many Premier League clubs have heavily scouted Bazoer, including Liverpool, Arsenal, and Manchester City. There also reports that AC Milan and Roma are also very interested in the youngster. Bazoer, who made his international debut last season has bee benched for Ajax’s captain, Davy Klaassen and could go for as little as £12.5 million.

Ajax had previously blocked any attempts for any foreign clubs to sign him but are not understood to allow the midfielder to leave, even as early as January. With his level of talent and the relaively low asking price, Bazoer would be a bargain for any club.