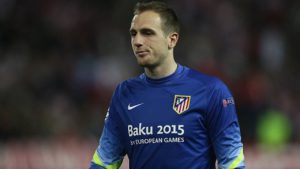 Jan Oblak has become one of the best ‘keepers Europe over the last few seasons since he took over from Thibaut Courtois. Due to his superb form, the Slovenian international has attracted interest from some of the biggest clubs in Europe. According to Goal.com, Arsenal are tracking the Atletico Madrid goalkeeper.

Arsene Wenger is very keen to add the young goalkeeper to the team, considering that Petr Cech is in the twilight of his career. Goal, however, reports that the Gunners have been put off by Atletico’s mammoth €100 million valuation. Wenger has enquired as to Oblak’s availability but has been rebuffed by Atletico on many occasions. Although Arsenal have been unsuccessful in their hunt for Oblak, they still remain interested should he become available.

The Slovenian international apparently will evaluate his options in the summer, although it is unlikely that any club will match his huge release clause.