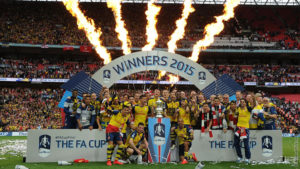 Monday’s draw for the 3rd round of the FA Cup saw 12-time winners Arsenal handed a visit to Championship outfit Preston North End. Preston are currently lying 14th in their division and are without a win in three in the league, while the Gunner sit second in the League after a resounding 5-1 defeat of West Ham on Saturday.

The last time the two teams met was 17 years ago, where the Gunners were victorious with a 2-1 result, with a lovely solo effort from Nwankwo Kanu.

Arsenal will be looking to become the first club to win the trophy for a record 13th time and Arsene Wenger will hope to become the first manager to make it seven FA Cup titles. Arsenal fans can look forward to watching the game between the 6th and 9th of January.