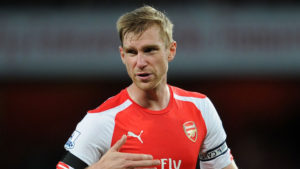 Per Mertesacker, Hector Bellerin and Olivier Giroud have all returned to first-team training.

Mertesacker suffered knee ligament damage during the pre-season and underwent surgery in August. Since then, he has been working on his fitness to rejoin the team amid rumours that he could return to Germany next year on a free transfer, with this being the final year of his contract.

Giroud and Bellerin have also returned to the fold, with the former possibly being included in the Arsenal’s trip to Basel. Bellerin suffered an ankle injury and missed most of November bar one game against Spurs. Giroud, on the other hand, suffered a minor thigh strain following Arsenal’s win over Bournemouth.

This will come as welcome news to Arsenal as the squad has almost returned to full strength with Danny Welbeck scheduled to be back in the next few months, while Santi cazorla and Mathieu Debuchy remains as the only long-term absentees.