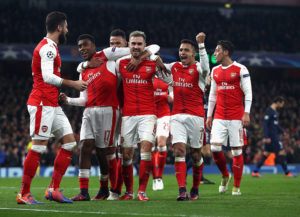 Following a summer of unusual heavy spending from Arsenal, Arsene Wenger will reportedly revert back to type and not make any significant signings during the January transfer window, according to Matt Law of the Daily Telegraph.

Following a resounding 5-1 win over West Ham at the weekend, the Gunners now sit second in the table behind Chelsea and seemingly back in form. Some fans may argue that Arsenal need to strengthen their squad even more so in January, in order to keep up the momentum and add quality to their title challenge. Moreover, with Santi Cazorla out for the foreseeable future, it might seem unwise for Arsenal not to add to the squad, especially as Jack Wilshere is out on loan, leaving Granit Xhaka as the only midfielder capable of replicating Cazorla’s role.

Arsenal will have Hector Bellerin back from injury for the Boxing Day clash against West Brom, while Danny Welbeck should return sometime after the New Year, leaving only Cazorla and Debuchy as the only long-term injuries, although that could all change.