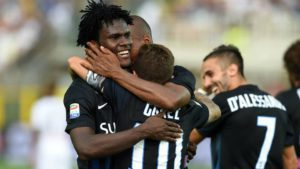 Atalanta are having one of their best seasons in recent memory this year. They currently sit sixth in Serie A to the surprise of many and it has been down in large part to two, star players: Mattia Caldara and Franck  Kessié. The latter of the two, is the latest to be linked with a move to Arsenal, with Atalanta apparently valuing him at €25 million, according to Calciomercato.

The young Ivorian has had a great season so far, scoring six goals and two assists in Seria A so far and has gained interest from some of the biggest clubs in Europe. Although Arsenal have shown interest in the 19-year-old youth academy product, apparently it is Juventus who are currently leading the race to sign him. Although Juventus are yet to agree on a fee with Atalanta for the player, it is understood that he is very keen on making the move to Turin either in January or at the end of the season.