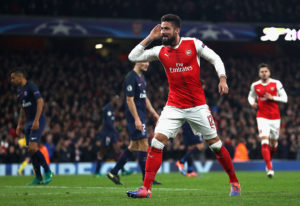 Following a long campaign with France over the summer and an injury early into the season, Olivier Giroud has found himself sitting on the bench. Furthermore, with Alexis Sanchez playing some of the best football of his career as a striker, Giroud has seemingly lost his place in the first-team. Due to this, there have been rumours that the Frenchman could leave the club with Napoli being heavily linked.

Olivier Giroud’s representative, Michael Maunello, however, has confirmed that Giroud will not be going anywhere this January, as reported by Football Mercato (h/t the Evening Standard).

‘I’ve never been in contact with Italian clubs, Olivier is very happy at Arsenal. He’s going to finish his season here. Nothing is possible in January for Olivier. He has no intention of leaving this winter.’

Although he may not be leaving this winter, at 30-years-old and with just over 18 months left on his contract, a summer move could be quite plausible.