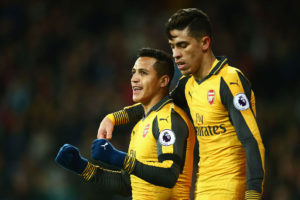 Alexis Sanchez only has 18 months left on his current contract and is yet to come close to an agreement over a new deal with the club. Due to this contract stand-off, the Daily Mirror is reporting that several Chinese clubs have approached Alexis Sanchez over a transfer.

Both Alexis Sanchez and Mesut Ozil want salaries close to that of the highest earners in the League but Arsenal are believed to be only willing to offer new deals of around £200,000-a-week. It is believed, however, that Sanchez is being offered an incredible £400,000-a-week deal, which would make him the biggest star to make the move to the regenerated Chinese Super League.

Sanchez is not only attracting interest from China but also from European giants, Manchester City and Juventus. With the Chilean fast approaching the final year of his deal, there is an increasing fear that he will leave the club, with Arsenal already identifying Marco Reus as a potential replacement.