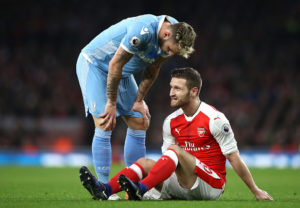 After going 1-0 down from a Charlie Adam penalty, Arsenal pushed on to score three goals and clinch the vital three points to push the Gunners top of the League, at least until Chelsea’s game tomorrow.

Arsenal still remain unbeaten in the League since their opening day loss to Liverpool and a big part of that unbeaten run has been the solid performances of summer signing, Shkodran Mustafi. The German international, however, was forced to come off against Stoke after suffering a hamstring injury. Following the game, Arsene Wenger confirmed that Mustafi will miss at least three weeks off.

‘I believe it looks quite a good hamstring strain. Good as in a bad sense. It’s a bad one. The minimum for an injury like that is 21 days – so he will have a nice Christmas’

The injury comes at a bad time for Arsenal as they embark on a packed schedule where they will play six games in 28 days, including a crucial game against Manchester City.