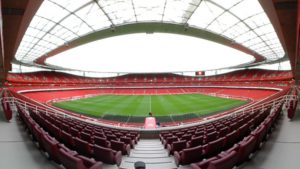 As Arsenal scaled the heights of the Premier League this past weekend at the Emirates, it has emerged that it was not only the team that elevated themselves to new summits in the past few days. As reported by many news outlets, Youtube personality, Dying Llama, released footage of himself breaking into the Emirates Stadium.

The Telegraph now reports that Arsenal have launched an investigation following the urban climbers breach of security. The group, who call themselves Night Scape, also filmed themselves breaching the security at the London Stadium back in October.

It is understood the recent footage is from nine days ago and shows the group freely wandering the stands, roof and pitchside. Following the release of the footage, Arsenal released a statement.

‘Fan safety is a top priority and we take security at Emirates Stadium extremely seriously. We have launched an immediate investigation into this incident. We work closely with police and anti-terrorism experts and will be reviewing our procedures.’

Arsenal will now conduct a reevaluation of their 24-hour security and CCTV coverage at the emirates Stadium.