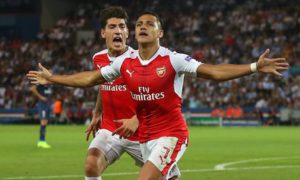 In an interview with Arsenal magazine, Alexis Sanchez admitted that life in London can at times be a stressful experience.

The Chilean international has been locked in talks with the Gunners over a new deal for quite some time now. Sanchez has been one of the best players in the League so far this season and wants to be paid as such. Sanchez wants close to £250,000-a-week whereas Arsenal are willing to offer him £200,000-a-week, a £65,000 rise on his current salary.

Although Sanchez is one of Arsenal’s star players, he spoke of his relatively quiet social life.

‘I like to go to London to eat something or have a drink with my friends. However, I am a very home-loving person and I spend a lot of time at home.’

‘I do explore the city if I have the time for it but normally I would rather stay relaxed at home. London can be a stressful place because it´s crowded and it´s a big city. Our routines as footballers can be energy-consuming too. You play one game after another, meet new people every day and travel a lot. That is why I try to disconnect and relax as soon as I get some time off.’