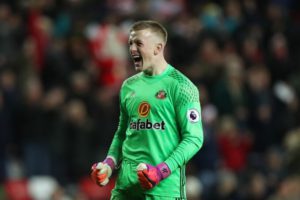 According to James Olley of the Evening Standard, Arsenal are lining up a surprise bid for Sunderland goalkeeper, Jordan Pickford.

Arsenal have enquired into the availability of signing the 22-year-old next month, with the intention of loaning him back to Sunderland for the remainder of the season. Pickford has been one of the surprise performers of the seasons so far and has arguably been the Black Cats’ best player in tandem with Jermain Defoe.

Pickford’s form saw him included in the England senior squad in October and prompted Sunderland into potentially offering the young ‘keeper a new contract, even though he signed his last deal back in January.

Cech’s form has come into question of late. Although Wenger has insisted that Cech could play on for a few more years, Arsenal need a young goalkeeper for the long-term, it won’t be easy for Arsenal, however, as Manchester City, Tottenham and Everton are all tracking Pickford.