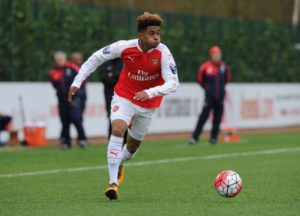 Arsenal academy’s, Reiss Nelson has signed his first professional contract for the club, further strengthening what is already a very rich academy, as reported by Arsenal.com.

The 17-year-old has had a fine time at Arsenal thus far, the highlight being the UEFA Youth League where he netted twice in six games for the Arsenal under-23s, a side where he has become one of the best players. As well being a sensation at club level, Nelson has starred on the international scene too, scoring as many as eight goals in seven games for England, whilst also scoring three at the European U-17 Championship in Azerbaijan earlier this summer.

Young Reiss Nelson joined the academy a decade ago and has since been one of the Gunners’ most exciting prospects. A professional contract, therefore, seems the right reward for such a promising talent.